History of the Ratskeller

The eastern baroque section of the Old Town Hall was completely renovated in 1910 and converted into a restaurant. The restoration strove to preserve the historic structure of the building which dates back to 1660. For 98 years, the Ratskeller was managed by a succession of tenants. The guests included not only countless local residents of Regensburg but also famous actors and high-ranking state officials such as Chancellors Willy Brandt and Konrad Adenauer. After a dinner at the Ratskeller, the latter passed his compliments on by saying: „Well cooked, chef.“ Following another restoration, carried out under the strictest conditions of monument protection, the restored coats of arms and paintings of past mayors and kings are once again returned to their former splendour, along with the crests of Regensburg‘s twin towns. Just as before, the inn is not just a meeting place for the town council but for all the townspeople, whether young or old. The „warm hospitality“ of the Ratskeller represents a seal of quality for the city of Regensburg.

The Deutsch family are the tenents of the Regensburg Ratskeller. The family also runs a large traditional farm specialising in locally grown products for the regional market. Since 1975, the family business also includes a butcher‘s shop which makes sausages and  processes and refines meat. Wherever possible, many of the ingredients used in the dishes at the Ratskeller in Regensburg are grown and produced locally. 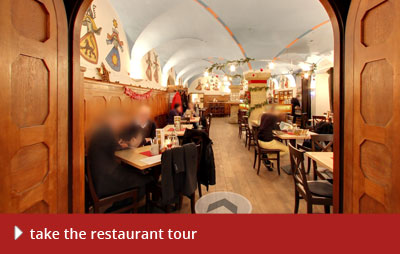 For reservations please send us a mail
reservierung@gastro-deutsch.de

We use cookies on our website. Some of them are essential for the operation of the site, while others help us to improve this site and the user experience (tracking cookies). You can decide for yourself whether you want to allow cookies or not. Please note that if you reject them, you may not be able to use all the functionalities of the site.